Mass surveillance has been happening for years. It is nothing new. Edward Snowden exposed the CIA and NSA for doing that back in 2013. I don’t understand why so much noise is being made about the new privacy policy of Whatsapp. It’s weird how people are freaking out about WhatsApp for something Google has been doing for ages without their permission. The only difference they told you upfront Whatsapp New Policy and they think the new apps don’t harvest your information. Almost 90% of people using Whatsapp would also have a Facebook profile/app on their phone, and sharing all the details (contacts, location, IP address, etc) with the company already. We need more alternatives too from Facebook and Twitter. You can’t trust anything to do with Google. Not when Zuckerberg bought WhatsApp for 19 billion dollars in 2014.

WhatsApp, Signal, or Telegram – Which messaging app is more secure?

There are truly delusional people out there or the telegram marketing division is working overtime. Facebook, WhatsApp, Twitter, Google, Instagram have all been integrating with each other since 2016 and this is how they do share your data across their platforms so there is nothing new people should be concerned about. Someone installed Truecaller to track people’s names, not knowing that Truecaller is using your credentials to expose you to other users and syncing your contacts. No App in the “cyber-world” is secure to share the personal data, that’s how they earn by selling. So be careful and mindful before sharing any important stuff. If you want privacy just stay away from technology. These social apps were already using our data even before the updates, the only difference is this time they are asking for our permission and people are freaking out. Which is the right one for you? Here is a comparative chart.

If they are not selling the users, how they can sustain themselves? Switching from WhatsApp to other free platforms is not going to solve the issues what you need to know is that every tech company that has free services they make money out of your data so some company may not tell you that but it’s exactly what happens behind the scenes. How do you think these companies pay for their bills if they can’t make money out of your data and offer you full free services? In the end, it is the priority of end-users whether to risk their privacy for attractive features or to prevent them from getting uncovered.

This is the age of the “Family” Whatsapp group. WhatsApp has built a community of more than 1.2 billion monthly active users worldwide by allowing them to message friends for free. The service has become much more than a no-cost chatting app. The description of the social bonding and peer pressure sounds similar to the theme of the 2017 movie “The Circle”. Whatsapp is idle chatter that gets consumed without too many defenses, and without having to test it against any form of external reality. It’s interesting that, depending on content and context, everything that’s positive can just as easily be the worst aspect of WhatsApp as well. It lives in a self-reinforcing bubble, a vicious circle of affirmations between people just like us with no tolerance for dissent or discussion. Families feel warm and dysfunctional at the same time. Every argument inevitably becomes acquiesce or a new WhatsApp group.

Read:  Why is it the Right Time to Support Khalistan Movement?

What does WhatsApp offer today? What is its personality?

In a country where education and psychological support are limited, WhatsApp can be an important tool to spread knowledge. Whatsapp does set itself apart in the intimacy and homogeneity that it provides with its own unwritten membership rules.

The Messaging domain is moving backward

There seem to be gazillion messaging apps out there that are all about creating little walled gardens where you are not allowed to talk to anyone outside the garden with mostly questionable business models along the lines of getting: millions of users, ????, Facebook buys you. So Whatsapp social media technology users don’t talk to Facebook Messenger users who don’t talk to google IM, etc. People are keeping a long WhatsApp list to show their powerful social network. It’s a very visible network. Very useful though and used extensively for Business in the Middle East and Southeast Asia.

Give an insight story where we can connect emotions

Whatsapp’s $16+ billion acquisition, destroying the Telecom Industry is one of its major effects as well. It got us more involved in the Digital World that’s for sure.  It takes great discipline not to let social media consume your life and identity! Whatsapp has effectively turned into a tracking tool. WhatsApp chose convenience over privacy and security, but here’s how you can fix this. By the way, an “attempt to intercept messages” is only detectable if you activate “show security notification” (In WhatsApp, go to: Settings > Account > Security > show security notifications: on).

It just caches forwarded messages on its own servers so that delivery is faster.

Can Signal be the new bitcoin?

Interestingly, the shares of the wrong company Signal Advance went up. Signal App presently is running on donations. The Signal is not as stable as Whatsapp. It lacks some features too like the last seen and few others too. Signal founders need to update the app as most of us are going to look for WhatsApp alternatives. But, overall, Signal is quite similar to Whatsapp and is quicker than other alternatives too. The developers just need to make it smooth. Though ‘signal’ has to add many features, it still is a better and safe app when it comes to security. All those who are about the downside of the signal app must remember that WhatsApp was also once a basic chatting app. Whatsapp is running by arm-twisting; whereas, Signal runs on donations and not selling your data to corporations so you get what you pay for. Whatsapp data is shared within the company and later sold to the analytical companies. 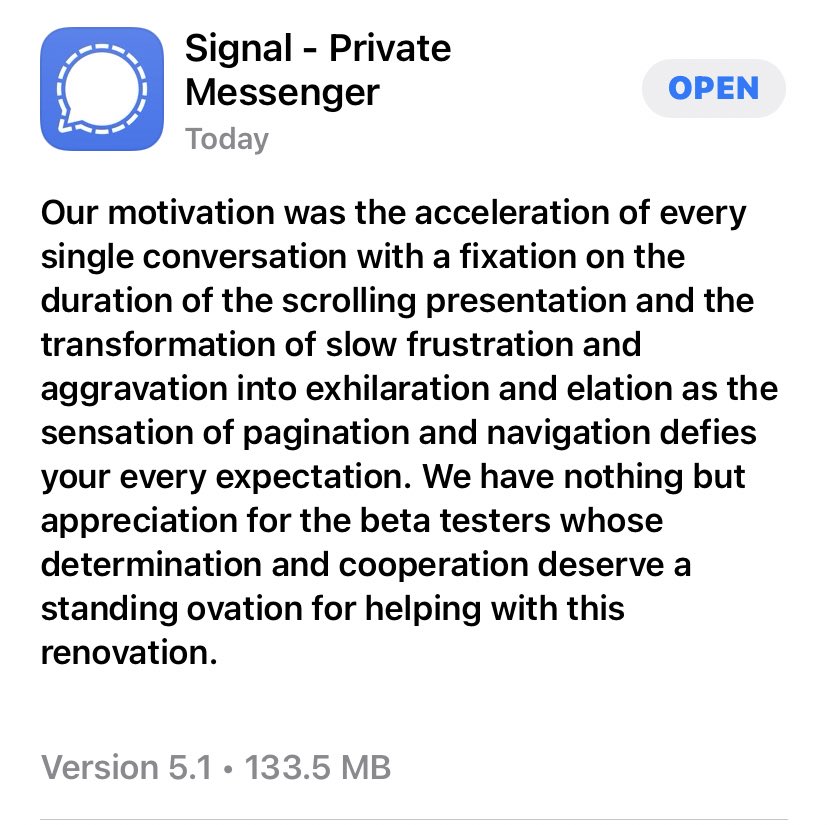 A beautiful message from Signal app on their upgradation. Really, I was like I was reading an Eminem Rap song in Marshall Bruce Mathers III’s voice.

Fun Fact: Signal app is created by an ex co-founder of WhatsApp who left after a rift with Mark Zuckerberg.

“creator Brian Acton, who left the world’s largest messaging service after a rift with Facebook CEO Mark Zuckerberg over monetizing the app.”

These are the most important advantages that Signal has over the others and ignoring them is not right:

The question remains; who had funded the establishment of ISM core to serve a billion users? Just the scale suggests the cost be half-billion dollars. The cost of ISM core is not as a cost of software, that it could be obliviated under open source/shareware etc; it is the hardware for the data center.

Why is Social Media getting Selective Censorship?

Why is it the Right Time to Support Khalistan Movement?

I will create a gif banner for your business presentation

I will create desktop or browser extension to your website

I will get instant business to business leads in any niche

I will record a critique or 3rd party feedback or interview

I will post a promotional shoutout on Pakistani blog

I will do Urdu narration of any product description

I will create an Urdu jingle and play with Pakistani beats

I will trademark memorable brand and business identity

I will do after effects based video editing

I will create a highly descriptive animated gif animation

I will write a cited journal for your technical thesis