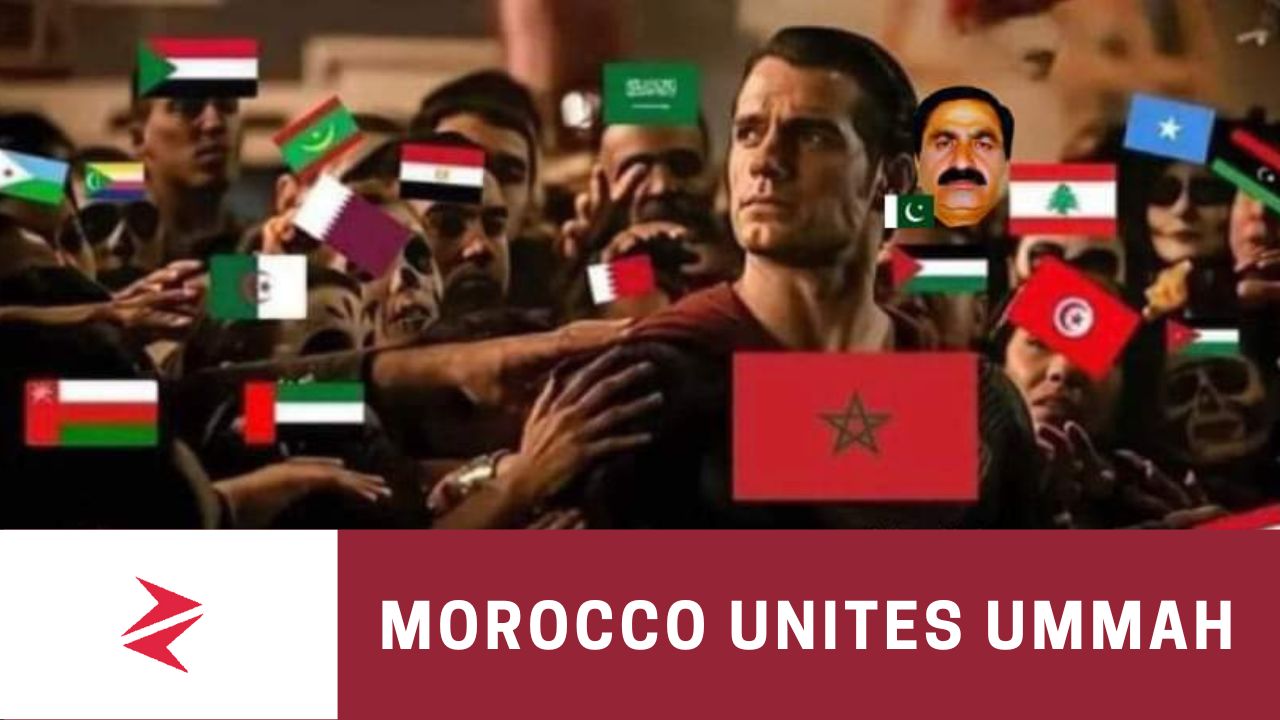 Well, Morocco had qualified for Semi-Final and played France its old colonizer at midnight today. The city of Paris has 780,000 Moroccan dwellers and 10,000 troops had been deputed in anticipation of probable clashes as Moroccans resent the French for their modern-day oppression. Morocco World Cup Squad had been demonstrating a counter-speech as all the Moroccan sports anthems include Palestine as a key subject.

Morocco is a country located in North Africa, and it has a rich history dating back to the days of the Roman Empire. The geography alone is unique. Within 5 hours you can go from the Sahara desert and end up in a ski resort. Throughout its history, Morocco has been a crossroads for different cultures and civilizations, including the Islamic world.

Casablanca is its capital and my all-time favorite movie Casablanca 1942 shows how culturally rich it is. Today, the city is known for its vibrant culture, beautiful architecture, and bustling economy. Casablanca is the largest city in Morocco and one of the most important economic and cultural centers in North Africa. The history of Casablanca dates back to the 7th century, when the city was founded by the Berbers, an indigenous people of North Africa. Over the centuries, the city has been ruled by a number of different powers, including the Romans, the Arabs, the Portuguese, and the French. In the 19th and early 20th centuries, Casablanca became a major center of trade and commerce, and its port was one of the busiest in the world.

Morocco’s climate is very temperate, and part of the Country is on the Atlantic Ocean, and they’re on the Mediterranean, too; just eight miles from Spain, and they have many wonderful beaches. Friendly people, good cuisine, and all types of interesting architecture. Yes, there’s a lot of beautiful tile work. Many big-budget movies are shot there as well. If you’re looking for an interesting place to travel to, then I would strongly recommend Morroco.

What is Popular about Morocco Food

Moroccan cuisine is known for its rich flavors and diverse influences. Some of the most popular dishes in Morocco include couscous, a staple grain made from semolina flour; tagines, slow-cooked stews made with a variety of meats and vegetables; and bastilla, a savory pie made with meat, eggs, and spices. Other popular dishes include kefta (spiced ground meat), shakshuka (a tomato and egg dish), and harira (a hearty soup made with lentils and chickpeas). Moroccan cuisine also features a wide range of salads, breads, and other dishes, as well as a variety of sweet and savory pastries. Some of the most popular desserts in Morocco include baklava, a sweet pastry made with honey and nuts, and halva, a sweet made with sesame seeds.

Morocco has 3/4 of the world’s known reserves of rock phosphate, our main source of phosphorus, so Morocco may be key to our long-term ability to grow food. Note: At the time of publishing, the United Nations does not recognize Moroccan sovereignty over Western Sahara, instead identifying it as a “non-self-governing territory”. Potash is something with which Morocco secretly controls China, India, The United States, and the World.

Morocco and its Islamic Heritage

Those who don’t believe in the concept of Muslim Ummah need to observe Muslims all over the world celebrating Morocco‘s wins in FWC 2022 regardless of their race or nationality. Although it’s just football, the feeling of unity is commendable.

Alhumdulillah! All the details of our lives are linked to our relationship with God. We praise Him and give Him credit for every victory, big or small. Glad to see that prostration has spread in football stadiums.

Islam first came to Morocco in the 7th century with the Arab conquest, and it quickly became the dominant religion. Today, the vast majority of Moroccans are Muslims, and Islam plays a significant role in the country’s culture and daily life.

Morocco has a long and complex history of Islamic rule, with various dynasties and empires rising and falling over the centuries. The Almoravid and Almohad dynasties, in particular, played a significant role in the spread of Islam in the region.

During this time, Morocco was known for its religious scholarship, and many important Islamic scholars and thinkers came from the country. The country was also an important center for the study of the Islamic sciences, including law, theology, and philosophy.

In modern times, Morocco has continued to be an important center of Islamic culture and learning. It is home to many historic mosques and madrasas, as well as numerous Islamic organizations and institutions. Despite the challenges it has faced, Morocco remains a country with a deep connection to its Islamic heritage.

Casablanca is where Imam Mehdi will gather his army and Hazrat Esa will descend. Islam’s majesty has come.

Morocco and its Diplomatic Relations with Pakistan and the Arab World

Morocco carries the African continent, the Arab, and the Muslim world, especially Pakistan. Praying circles for Morocco are being arranged and conducted in Pakistan.

In 1956, France and Spain decolonized Morocco, rendering it under the control of the Sultan of Morocco. How Pakistan facilitated Morocco to deliver its UN speech in 1956 is quite a story. When Ahmed BALAFREJ who was denied from Morocco to deliver a speech at the un in 1956, Sir Muhammad Zafrulla Khan who was the first foreign minister of Pakistan arranged a Passport for him overnight while Pakistan being a permanent member of the UN General Assembly that time. Later Ahmed BALAFREJ became a signatory at the Final Declaration of the International Conference in Tangier and annexed Protocol. Signed at Tangier, on 29 October 1956 and later went on to become the first nominated Prime Minister of Morocco.

The official language of Morocco is Arabic, but French is also widely spoken in the country. Many Moroccans are bilingual and are able to speak both Arabic and French, as well as other languages such as English and Spanish. Moroccan Arabic, also known as Darija, is the spoken vernacular in Morocco and differs from Modern Standard Arabic, which is used in writing and formal settings. Moroccan Arabic incorporates many loanwords from French and other languages, and has a distinct accent and pronunciation.

Morocco is known for its rich history and culture, but it is not particularly associated with black magic. Magic and spiritual beliefs have long been a part of Moroccan culture, but these beliefs and practices are generally not considered to be black magic. Instead, Moroccan spiritual practices are often focused on healing, protection, and other positive uses of magic. While some people in Morocco may believe in the existence of black magic, it is not a widespread or commonly accepted practice in the country. It is generally believed that King Sultan Abdel Aziz Bin Saud (Brother of King Fahd, Abdullah, and Salman) used to visit Morocco a lot and it was because he went there again and again and was possessed and killed in extraordinary circumstances. He was next in line for a reign on the throne after King Abdullah.

Morocco and its Expansion to Spain

Morocco is a country located in North Africa, across the Strait of Gibraltar from Spain. Throughout its history, Morocco has had a complex relationship with Spain, with periods of both cooperation and conflict. In the 16th and 17th centuries, Morocco was a major naval power and often engaged in warfare with Spain. The two pillars of Hercules are part of the story. One of the two pillars is the mount peak of Gibraltar where Governor Tariq Bin Ziyad from Morocco was asked by his administrative Arab Leadership to invade Spain and the West of Spain (Portugal). Tariq Bin Ziyad had taken an army of 7000 troops and since the Christians there were already tired of the local monarchy they as well adjoined being one hundred thousand in number and so Islam ruled for eight hundred years in the adjacent areas.

In the 18th and 19th centuries, Spain and Morocco entered into a period of relative peace and cooperation, with Spain establishing a number of trading posts and other interests in Morocco. In recent years, the relationship between the two countries has been largely cordial, with both countries being members of the European Union and engaging in trade and other forms of cooperation. Today, Morocco shares a few of the strangest cordoned-off borders with Spain and France which are part of the contention. The seven Castles in the Portugal flag represent the Islamic Forts that Portugal recovered by defeating 5 Emporers depicted in the Flag.

Today, the match was a face-off between Morocco (whose players are seen to be spiritually immersed in Islam with their substitution time prayers upon entering the ground, their flaunting of the Palestinian flag, and their prostration on their victory) and a racist Islamophobic French team that disappointed Fifa Fans with their sloganeering for LGBTQ+ in their match against Japan. Also, the caricatures and blasphemy of the holy Quran are conducted in France frequently in the name of freedom of speech.