Imran Khan and The Self Boosted Ego
Advertisement 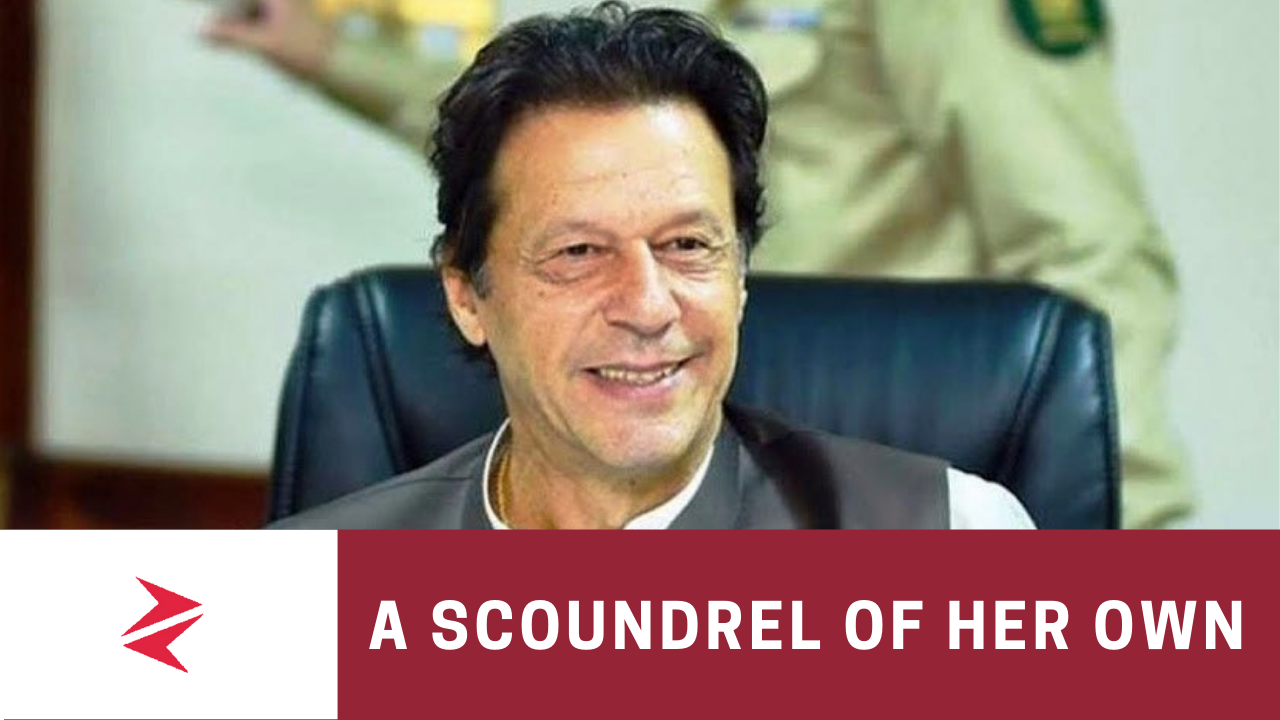 Imran Khan always has had sherwani syndrome. He came in stealing votes with pre-polled rigging. Perception is that he came into power with بیساکھیاں and couldn’t perform without the support of محکمہ ذراعت. All political parties must be united in rejecting unconstitutional interference in politics, and assert the importance of parliament in ensuring accountability in our democracy.

A Visionless Leader on his Poor Team Selection

Now it is not right to whine or complain. Everyone who supported PTI before 2013, knew exactly when the rot crept in. Everyone knew when deals with the devil were made and many called it out. Before 2018, everyone knew this day of reckoning would come and how it would come. Now it’s here. Don’t be shocked. Imran Khan has ڈاکو، چپڑاسی with him, why? Just for keeping in power.

Imran Khan imposed the most incompetent person on the people of Punjab just because his ego is greater than the might of the province. Imran Khan went from 4 years of “Usman Buzdar is our man in Punjab, he will challenge the status quo” to “Punjab Chief Minister Usman Buzdar will be asked to resign in a day or two, and that Chaudhry Parvez Elahi is the PTI government’s preferred choice for his replacement”. Imran Khan apart from opening a camp office in Multan didn’t do enough effort to make جنوبی پنجاب.

Only Imran Khan has the courage to criticise others for doing exactly what he has done. Anyone can predict what is he going to say next as we heard same stories time and again – His stuff seems boring , outdated and repetitive. Youthias still think he’s doing all this for Pakistan. No honey, he’s doing it for power, Imran Khan is not bothered by ٹماٹر rates! What do you think an elitist, sugar mill don like Elahi will do?

Imran Khan’s Vavda had dual nationality, his acquaintace Atif Mian Qadiani, his FBR guy, his State Bank guy, his Zulfi Bokhari, Tania Aidrus, Moeed Yusuf all have vested agendas. Senator Faisal Javed was the presenter of FM radio. By setting up its own PR firms, it took billions in business from the KP government. And nowadays it is also taking from the federal government. Has become a billionaire. This is the real change.

Imran Khan’s number one performing ministry is مواصلات held by Murad Saeed. Imran Khan has always whined about PMLN making roads and infrastructure. At that time, the activity of connectivity in the country was merely a stunt show. How fair?

Imran Khan’s biggest acclaim is foreign policy. Especially, the Islamophobia campaign that he held in the UN. Shah Mehmood Qureshi, the Foreign Minister didn’t even land on performance par of the top ten ministries. Lest forget, how Imran Khan pronounces the Kalma Tauheed and salutations on Prophet Muhammad’s Shahada. Because I won’t become personal here for him misquoting Riyasat e Madina and the event of the Karbala. But his accounts of history are as accurate as Germany-Japan being neighbors of each other.

On the accountability front, remember Shahbaz Akbar? For instance, he is found nowhere. Imran Khan is to date hiding behind the stay in foreign funding case. Not to get started with Descon’s Tycoon Abdul Razaq Dawood as to how he deprecated foreign direct investments and what were the false hopes of Oil Produce worth 200 Billion Dollar from offshore Wells.

Imran Khan makes analogies of every state affair with cricket. His control over cricket is pathetic. He deleted department cricket. What on Earth. Why is there an intervention in the team selection? Imran Khan has conferred in his book how he used to gamble against the odds to make quick bucks. Gambling is haram. And we did not win a single tournament in his regime despite the high probabilities of victory for team Pakistan.

The overseas Pakistanis are offended by his endless spree of begging them to influx their remittances. All overseas Pakistanis who support Imran Khan and live in Western countries including his children, should immediately return to Pakistan and bring all their money from there to Pakistan. Imran Khan said Bilawal should know urdu well where as his ward Salman and other son and alleged daughter are not good at it either. I hope I am not transgressing again.

On The Economic Front

In March (with more trade days than the month of February) exports shrunk by 2% in dollar terms despite the dollar cost having risen to 184 Rs per 1 US$. A horrifying equivalency is being quoted for June.

According to the Pakistan Bureau of Statistics, a 35.39 $B trade dollar deficit has already been registered in three months. For the last quarter, there is an anticipated trade deficit of 10-15 Billion Dollars.

The parity at which they got Rupee at 104 when Nawaz Sharif was ousted and immediately corrected by Miftah Ismail at Rs 115 against 1 dollar, and Rs 123 by the caretaker and despite that, if the export doesn’t double one should ask Asad Umar. Imran’s biggest candidature for finance, Mr. Asad Umar, was no more his finance minister only after a few months. Imran Khan had borrowed Two (2) finance ministers whom he said were responsible for bringing the country to a statute where it is today.

Imran Khan said he would commit suicide if he were to go into IMF and later realized that he wasted time in seeking loans a little too late.

“IMF would like to continue the support of Pakistan” but the conversation shall be held with the new Govt.An official in writing response by IMF to Pakistani Corresponder

Imran Khan curtailed the Defense budget and made sure that our countrymen had to suffer at large. He left the jurisdiction of the State Bank with an already installed Governer in control of the IMF.

On the Defending Fronts

Imran Khan divided the Nation with a nationalist and patriotism narrative that his political party and supporters are the only ones loyal to the country. Imran Khan made our armed forces controversial and then equated them to be جانور. Imran Khan let go of the 35a abrogation from the Indian constitution. Imran Khan ultimately gave the right to appeal for the same Kalbhoshen he thought Nawaz Sharif was guilty of not calling out. Imran Khan didn’t respond to a misfire of BrahMos against his بڑک to retaliate.

What has he done for the Youth

Imran Khan is blabbering on and on with indecent slurs and he says he ought to school the youth as its godfather. A person suffering from the disease of selfishness has created a generation without peeping into his collar that now thinks that he has never done anything wrong in his entire life. All those who criticize or disagree with him are entitled to enmity and abuse. This disease drives them insane.

Imran Khan said he will continue to fight till the end whereas he was looking for hideouts to implement 63-1/a upfront up until he destroyed the constitution. Even on the day of the vote count, the deputy speaker Qasim Suri (who for the past 6 months is hiding behind a stay order for a vote recount) enforced article 5. Imran Khan reminds me of the kid who when refused another turn to bat, would take his bat and ball with him so nobody else can play either.

The no-confidence motion must not have been accepted while the forged letter was with the Govt on the 7th of March which allegedly lead the deputy speaker who was just there to preside but pass a ruling at the behest of the speaker (against whom there was already a no-confidence) while reading a predesigned ruling within two minutes and that letter read Asad Qaiser.

No debate no nothing and declared combined opposition disloyal to the state. A 197 majority composed 68% of the total national assembly seats. Whereas, in the hearing of self filed Presidential reference, the Attorney general had categorically discounted any chances of not giving the right of vote to the members of the National Assembly.

Soon after that, Mr. Imran Khan went on to address the Nation within 15 minutes urging the President to dissolve “assemblies” where he meant National Assembly only. This is in violation of the constitution as without the result of the No-Confidence move, PM could not dissolve the assembly.

Imran Khan forged the Letter/Cable which he is using to allege opposition of treason. Will Imran Khan respond a very simple question? If US threatened you on March 7th through a Pakistani diplomat then why did you invite US Under Secretary of State in OIC conference in Islamabad on March 21st?

This is not a tactical win-lose situation, it is a strategic crises that has put our constitutional framework at stake. This is beyond politics now. To all my PTI friends who are happy with subjugation of vote of no confidence, this is severe subversion of the constitution. Deputy speaker Qasim Suri rejected no-confidence move under article 5 and after that. For the first time we are witnessing that a political party workers are congratulating each other after bringing down their own government! What limited mindset! Phew.